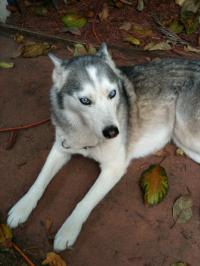 For years I have seen the bumper stickers on cars that say "who rescued who?" I thought these were great signs but did not realize that this could be literally true. Just before Thanksgiving of last year, one of my rescued huskies, "Nakita" began going crazy in the house and would not calm down. She kept alerting for nearly an hour and a half. We had smelled smoke in the house earlier that day, but people in the neighborhood had also just stated their fireplaces, as it was the first cold day of the year so far. Unfortunately, the smoke that we smelled was from a fire starting in our home. An electrical outlet was malfunctioning and melting in the wall, and Nakita alerted us to the point that we were able to detect the fire before it could start in the wall and spread. She alerted on it even before a smoke detector could. She rescued us and the other huskies by letting us know there was something amiss. Fortunately the fire department found the source and stopped the issue. They stated that had it been 10 or 15 minutes longer, that the whole house could have been on fire. So, I now ask myself, "who truly rescued who?