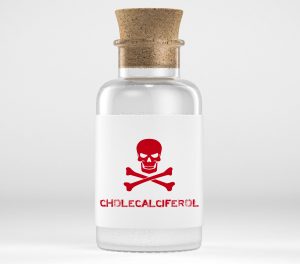 I read an article recently which scared me. Really scared me. I wrote this blog the moment I finished reading it. The article mentioned that d-CON was changing their ingredients.  Whether you’ve actually ever had to use it (hopefully not) you’ve probably heard of d-CON. If you haven’t, it’s the most widely-sold rat poison in the United States.  So, why am I so worried?  Why do I care if they’ve changed their formula to kill rodents?

The simple answer is, the new active ingredient works a little differently, and is much, much harder to remove from your pet’s system. More on that in a second.

It all started when the EPA decided to limit the types of active ingredients in rodenticides a few years ago for residential use. The EPA’s new rules eliminated what are known as “second generation anticoagulant rodenticides”- often referred to as “long-acting anticoagulants”. These active ingredients that have now been banned include brodifacoum, bromadiolone, fifenacoum and difethialone. d-CON, prior to their mandated switch contained brodifacoum and difethialone.

These new rules don’t just apply to d-CON. They apply to all manufacturers of rodenticides who make these products for residential use.  I am using d-CON as an example- as they have the biggest market share, and lots of folks refer to most any rat poison by this brand name.

Since the EPA instituted these new rules banning the funny sounding names I just mentioned, rodenticide makers like d-CON can only use ‘first-generation anticoagulants’. Through extensive testing, d-CON found many of these to be ineffective, and narrowed their choice to two different active ingredients. The first- bromethalin- is a neurotoxin- with no known antidote.  Their second choice was cholecalciferol. Although cholecalciferol is a ‘safer’ product than the neurotoxin with no antidote, it’s still nasty stuff.  Here’s why.

The old formula, while still highly toxic to your pets, was relatively easy to treat- if we treated quickly and knew what the poison was. Usually it would be lots of Vitamin K, perhaps some activated charcoal and lots of fluids.  Some cases could be worse depending on the situation, but it was relatively manageable when identified and treated quickly. This new stuff, cholecalciferol, not so much.

If the active ingredient cholecalciferol sounds familiar, it’s because it is a common supplement for humans with calcium deficiency. It’s also known as vitamin D3. So, if your doctor has recommended you take this to help with a calcium deficiency- it is imperative you keep it away from your pets.

The problem with cholecalciferol is that it can stay in a pet’s system much longer than the old stuff. That means treatment is expected to be a much longer process (days or weeks) of aggressive use of IV fluids, constant bloodwork to monitor kidney values and calcium levels and much more.  We’re talking a great deal of expense, with no guarantee of a full recovery or positive outcome.

To complicate matters, it is difficult to know how much of the ‘old stuff’ is still out there in garages, barns, parks or wherever rodent populations are kept in check.  If your pet is unfortunate enough to get into what you suspect is rat poison- it’s critical that we know exactly what type it is so we can treat the patient in the appropriate way.  We can’t treat the cholecalciferol poisoning in the same way we did the previous product. Sadly, clinical signs of cholecalciferol poisoning don’t typically appear until 24-48 hours after ingestion, which is often too late.

an ammonia smell to urine or breath

I can’t fault d-CON for this. Not one bit. They have to play by the rules set forth by the EPA.  I am actually pleased that they are partnering with the Pet Poison Hotline to provide continuing education for veterinarians on this subject.  There is an upcoming webinar in August- and I plan on attending online, so we can provide the best care for your pet.