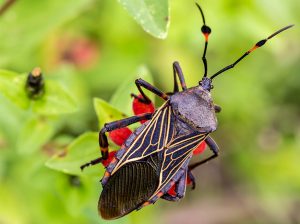 It has a cute nickname and sounds like a harmless little insect- but the so-called “kissing bug” can spread a disease to both you and your dog which could ultimately be fatal.

The parasitic ‘Kissing Bug’s’ real name is the Triatomine bug, and it exists here in Florida, and throughout much of the southern United States. (It has been identified in 28 states so far.) The insect got its nickname because they often bite their victims (hosts) on the face- often near the lips, or near the eyes. The host is often asleep when the bite occurs- and the face/head is the only flesh that is exposed at the time of the bite.

Usually, when insects bite, the result is often some discomfort which goes away in short order.  But with the Kissing Bug, they do something unusual, and disgusting. After biting their host, the kissing bug defecates on or near the bite.  The fecal matter then can get into the wound and infect the host with Trypanosoma cruzi- a parasite which can cause Chagas disease in both humans, dogs and numerous other mammals.

Although not all Kissing bugs carry the parasite Trypanosoma cruzi parasite, samples of the bug found in Texas have shown that close to 50% of the bugs there carry the parasite. Think of it like heartworm disease which is a problem here in Florida. Mosquitoes spread heartworm disease- but not all mosquitoes are carriers. The problem is, we can protect our pets against heartworms. At this time there is no vaccine or prevention against Trypanosoma cruzi.

What is Chagas Disease?

Chagas Disease is an inflammatory and infectious disease also known as American trypanosomiasis- and it can infect a number of species including humans and dogs among other mammals. Texas A & M has an excellent brochure online which outlines how the disease can affect your dog which is on their website here.

In humans, there are two forms, acute and chronic. The acute phase can last for weeks or months with numerous symptoms that can often be mistaken for other illnesses. Often the symptoms are mild. These symptoms in humans are:

Many of these symptoms may just vanish on their own, without treatment. The problem is that just because the symptoms have disappeared, doesn’t mean that the infection is gone. Patients often are asymptomatic for years, if not decades- which is the chronic phase. Some victims of the disease may never show outward symptoms, whereas severe cases can lead to death due to cardiac problems.

How real is the threat to me- and my pets?

Although the threat is relatively low, it is a real threat, as these insects have been found in Florida. Twelve people in Texas have 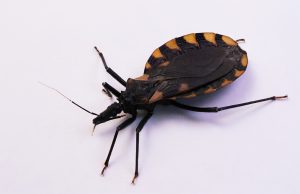 recently been diagnosed with Chagas disease, so it is becoming more widespread. The Florida Department of Health does not track statistics on Chagas disease, so it’s difficult to get concrete data for our state- but we need to treat this threat as serious- despite the relatively low risk. The risk increases for pets who spend the majority of their time outdoors.

Kissing bugs like hiding places such as under porches, beneath cement, in or under wood piles. If you see what you suspect is a Kissing Bug, do not handle it, or even attempt to ‘squash’ it. If you can safely trap the insect inside of a plastic bag or other container, it can be killed by soaking a cotton ball with rubbing alcohol and placing the cotton ball inside the closed container.  The insect can then be sent to one of many research facilities for testing.  Texas A & M University has a great web page related to the identification of these insects- and will accept specimens for testing. Help on identifying kissing bugs can be found here.

I don’t want to be an alarmist. As I mentioned, the risk is relatively low- but I know there have been lots of news reports on the topic- and I want everyone to know about the potential threat to you and your pets.